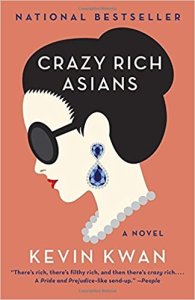 Having stumbled across a film trailer for the highly anticipated release of Crazy Rich Asians, I thought I’d give this much talked about novel a read to see for myself what the hype was all about.

When Rachel Chu is asked by her boyfriend Nick Young to accompany him to his best friend’s wedding in Singapore, she does not expect to be thrust into the crazy rich world of Singapore’s elite, much less to find that Nick is at the very centre of it all.

Faced with Nick’s snobby relatives and jealous ex-girlfriends Rachel tries to navigate her way around the glitz and the glamour of the ‘overseas Chinese, who speak with British accents (thanks colonialism!), charter private planes at a moment’s notice, hold hen parties on exclusive private islands, think nothing of spending a million dollars in ten minutes, casually name drop high-end design labels and their personal net worth in polite conversation, and all have specific opinions on where to get the best satay.

Amongst the several plots by various parties to sabotage Nick and Rachel’s relationship, Nick’s mother Eleanor, not at all pleased that her son is in a relationship with a woman from a less than privileged background (despite having attended one of the top universities in the US) and an ABC (American Born Chinese) to boot, emerges with a plan that will not only destroy the relationship, but potentially Rachel herself. Meanwhile, Astrid, Nick’s cousin struggles to keep her marriage together for the sake of appearances, and Eddie, his other cousin, not content with his own personal wealth strives to keep up with the Mings, and well, just about everyone else who he considers to be wealthier than him. Welcome to the world of the crazy rich.

I did enjoy reading Crazy Rich Asians, it was funny, tongue-in-cheek and filled with the kind of drama that wouldn’t be out of place on an episode of Dynasty. But at the same time I did weary of the endless mentions of prestigious design labels, the opulence that was far beyond my imagination and the obsession with who’s who and how much was their net worth. It’s an unbelievably shallow world which I imagine doesn’t just exist for crazy rich Asians but crazy rich people in general.

And it’s easy to laugh or critique the shallow pretensions of the characters, and through Rachel, we’re able to do just that as she represents all of us that are outside of that world. In addition, Rachel’s character keeps the reader grounded in the sense of reality and normalcy that escapes the other characters. Nick’s inability to see just how outrageously wealthy his family is astonishing to say the least (like for real dude? Your grandmother lives in a palace). But given that it is all that he has ever known, and that he had been taught from an early age not to talk about wealth, it’s kind of understandable (kind of). But it also serves to show just how much of a bubble the very wealthy reside in – even the well-meaning ones – and also how wide a gap money and class can cause within a culture and within families.

Given all the stereotypes of Asians in the novel, I did find myself wondering what other Asian people thought about it, particularly those who are from the kind of privileged background described. Were they offended? Did they find it funny? Was a truth or accuracy to the depictions? At the same time I thought that it was refreshing to see a people other than white people in positions of power, authority and privilege be written about, especially in Chick-Lit which is usually the domain of white characters. (Side note: there are very few white characters in this novel, and those that appear are in ‘service’ roles, i.e. a snooty shop assistant or hotel manager). Add to the fact that it is written by an Asian author of a similar background, I could only raise a fist to bump in praise of diversity.

What I liked most about the book was its depiction of Singaporean culture and history. I didn’t know much about the country so it was nice to get a small insight. And its links to Britain, via colonialism of course, made it somewhat accessible as I recognised some of the rituals and practices derived from British customs. In fact, despite all the crazy in the book, Crazy Rich Asians is really and ultimately a love letter to Singapore, and I think this is done very well. It definitely made me think that I’d like to visit someday as it looks amazingly beautiful, plus I really want to know where the best place to eat satay is.